To investigate sensory functions in mosquitoes, we introduced into An. gambiae the QF2/QUAS binary expression system we originally developed for Drosophila (Potter, 2010; Riabinina, 2015; Riabinina 2016, Riabinina, 2016). The QF2/QUAS system requires two components: the QF2 transcription factor expressed in a tissue of interest, and a QUAS-geneX effector (or reporter) transgene (Potter, 2010; Riabinina, 2015). QUAS denotes the DNA binding sites for the QF2 transcription factor. When the two binary components are in the same cell, geneX is robustly expressed. This is highly versatile since once a QF2 line is validated, it can be used to reproducibly and robustly express any effector gene in that tissue by crossing in a new QUAS-geneX line. Moreover, due to transcriptional amplification, geneX levels are often higher than what could be achieved by direct promoter–geneX fusions, which is particularly useful for capturing expression of chemosensory genes. 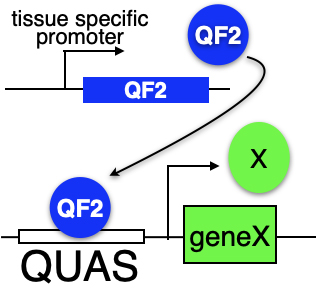 We cloned the promoter region for Orco, an olfactory gene expressed in 65% of all olfactory neurons, and generated AgOrco-QF2 transgenic mosquitoes. We rigorously validated AgOrco-QF2 transgenic mosquitoes as robustly driving QUAS-CD8:GFP (membrane-targeted GFP) expression in Orco+ neurons (verified by anti-Orco immunohistochemistry) (Riabinina, 2016). To monitor neuronal activity, we generated QUAS-GCaMP6f transgenic strains (Afify, 2019). GCaMP6f is a modified GFP that fluoresces more brightly in the presence of calcium, and it is routinely used as a proxy for neuronal activation. This allowed us to be the first to directly visualize odor-induced activities in genetically labeled olfactory neurons in living mosquitoes.